The Three Bears' Problem, and Solutions 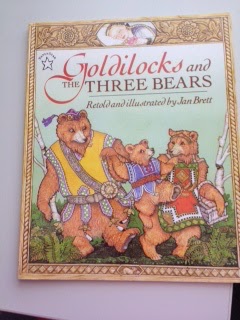 I started this lesson by reading two different version of "Goldilocks and the Three Bears," one by Jan Brett and the other by James Marshall. Jan Brett's version is very traditional and beautifully illustrated. Many of my students are not familiar with traditional versions of European fairy tales, having either only seen the Disney versions or they are from another culture. Brett's version gives them the basic story and a lush image. James Marshall's Goldilocks has quite a personality. Marshall tells the basic story with humor and more cartoon-like illustrations. So after reading both, my students have the traditional tale in their minds, along with some possible personality traits that may be helpful as they move into problem solving. 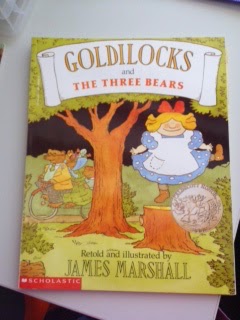 Next  we brainstormed the problems that are left at the end of the story. After some discussion, the class agreed that it's the Bears who still have problems. What if Goldilocks comes back? It's not pleasant to have a little girl break into your house and ruin your belongings.

Working in small groups, students generated ideas that the Bear family might try to solve this problem. I warned them that no one, including Goldilocks, could be hurt by their solutions. After each group had several possible solutions, the next step was to choose one solution and create an action plan. I gave them a Who-What-Where-Why-How worksheet to help them focus their ideas.

Jerry Flack includes many helpful ideas for teachers in working through the steps of Creative Problem Solving, and he also includes examples of possible problems, solutions, and action plans. The lesson plan is very adaptable to different focuses and to different age groups. The book seems to be out of print at this time, but it is not difficult to find used copies online.

Most of my students focused on ways to keep Goldilocks from getting into the Bears' house a second time. Alarms, moats, and peep holes were some of the solutions. Interestingly, none of them suggested locking the door! One group of students chose helping Goldilocks have better manners and respect as their goal. They planned to invite Goldilocks to the Bears' house for a friendly discussion. All the ideas were shared with the whole class. I hope this helped them all to see that there are many solutions to the same problem.

The last part of the Goldilocks activity was another version of the fairy tale. This one is Goldilocks and the Three Hares, by Heidi Petach. This version has rabbits instead of bears and it really funny. The Rabbit family is quite modern - Mama burns the oatmeal, so the family goes out for breakfast. Goldilocks falls into their rabbit hole and very entertainingly goes through the porridge, chairs, and beds parts of the story (Papa Rabbit has a water bed, causing a different sort of problem for this Goldilocks. Running along the bottom of each page is another story featuring a family of mice, who sarcastically comment on the story going on above them. I would read this just because it's so funny, creative and well executed with story of illustrations. But it can also show children that problems can be approached for other directions entirely. 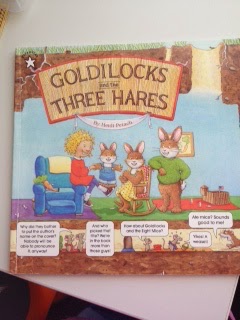 That is where we left Goldilocks, though there are plenty of other related activities, including writing sequels, telling the story from another perspective, or putting Goldilocks on trial, to name a few. My goal with this lesson was to try to push my students to think divergently and then convergently, so that they would think outside the box of the fairy tale, but also follow the problem through to a solution.

Becky Leff
I am a 4th grade teacher at Quest Academy, an independent school for gifted children. Besides gifted education, my other major interest is music. I play (French) horn in several groups in the Chicago area.